If you’re like me and have been watching Venus and Jupiter dance in the night sky these past weeks, then this stunning photograph by Mark Ellis will certainly delight. It was taken on a beach in Maui, and the juxtaposition of that indigo sky with the almost otherworldly clouds and terrain makes this a truly incredible image. And look at how beautifully bright Venus is! Jupiter is slowly pulling away from Venus now, but the pair can still be seen in the night sky for a little while longer.

Despite how bright Venus is, I can’t stop looking at the Pleiades peeking out from behind the clouds. Since I was old enough to recognize that particular group of stars, I’ve always loved looking for them in the night sky. As a child of maybe eight or so, while at my family’s little horse ranch, I would spend hours laying on the grass looking up the stars, often focusing on just the “Seven Sisters,” imagining myriad stories of who these mysterious sisters were (I only knew then what the constellation was called, not the mythology behind it), and why they were shining so brightly in my sky.  Many years ago in my early twenties, I had the pleasure of spending some time with a Lakota medicine woman, Barrett Eagle Bear, and I remember being enraptured by her telling of the Lakota story of this particular constellation. The story of seven young girls who, over seven days, were taken up to the sky by an eagle. The eagle was defeated and the girls were returned to earth, but their spirits remained in the sky.

I often write about the sky in this blog, and it’s because it has a similar effect on me as do great books and beautiful art… it stirs both my emotions and my intellect. So I’ll keep looking up, as should all of you. I’ve said it before and I’ll say it again.. our universe is a pretty amazing place. 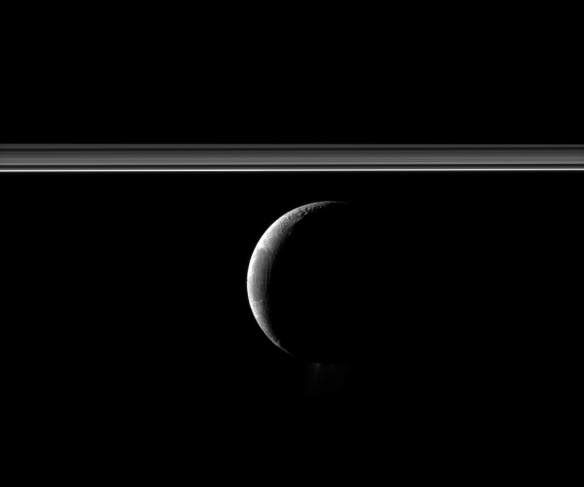 For a wonderful and informative discussion of this image of Saturn and its moon, visit Bad Astronomy, and as Phil Plait so eloquently reminds us towards the end of his post,

…in science, there’s no such thing as just a pretty picture. Science is a tapestry, a vast complex fabric interwoven with countless threads. Each of those threads is amazing, each important, and each leads to another. And that’s where the true beauty of science lies.

Earlier this year, NASA’s NPP ( National Polar-orbiting Operational Environmental Satellite System Preparatory Project), took a series of images of the earth, which, when stitched together, produced this absolutely stunning image.

We really do have a beautiful home, don’t we? And for an even more incredible view, click here to view the 8000 x 8000 pixel version, it’s well worth it.

I came across this image at Phil Plait’s Bad Astronomy blog; the place where I get most of the astronomy photos that I post here.  In his post about this image he had this to say,

Apropos of nothing, I’ll note the images making up this seamless mosaic were taken around the same time the Earth was at perihelion, when it was closest to the Sun in its orbit. There is nothing particularly important about that fact, but still… when I see pictures like this I think about how amazing our planet is, and how wonderfully well-adapted we are to it. Evolution is a stochastic process, a semi-random series of bumps and false starts that literally made us who were are today. But that doesn’t change the feeling of comfort I get when I see a picture of Earth, floating in space, sitting in the brightest and warmest sunlight of the year.

As you all are probably well aware by now, I love astronomical photography. Whether its images taken as close to home as our moon and solar system, or pictures of the ultra-deep field, I am always left in awe as to how immense our universe is, and conversely, how small we really are. But seldom do those images really communicate the “largeness” of astronomy. It’s incredibly difficult to get a sense of scale from the images, and looking at the numbers doesn’t necessarily help. Saying that something is over two million light years away (like the Andromeda galaxy) may begin to give us a sense of the immensity of space, but really, we have no way to even begin to understand or conceive of those kinds of distances.

Then I see an image like this one. It’s of Saturn and two of its moons, Enceladus, the larger one, and Epimetheus, the tiny, almost invisible speck to the left. 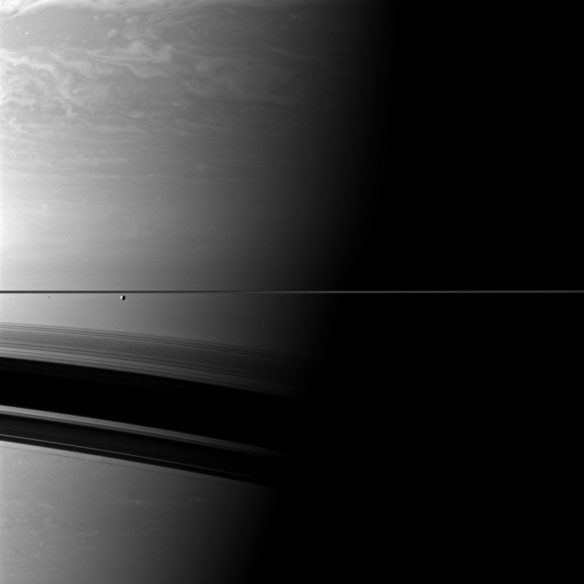 Saturn and two moons. Click to see it at full resolution.

This image shows, of course, the ringed planet itself, with the rings seen edge-on and their shadow cast across the planet’s southern hemisphere cloud tops. But look to the left, just below the rings; see that half-lit disk? That’sEnceladus, an icy moon of Saturn. It’s about 500 km (310 miles) across, which may start to give you an idea of how much area this picture covers. Even though it’s as big as my home state of Colorado, it’s positively dwarfed by the looming presence of Saturn behind it… and we’re not even seeing very much of the planet here! Saturn is over 120,000 km (75,000 miles) across, nine times the diameter of Earth.

He later goes on to write that the one thing he wishes people understood better about the universe is scale. I agree. It’s rare that a photograph conveys the sheer massiveness of the universe, and as he says, “we’ve barely dipped our toes in it.”

When I saw this image I instantly started humming Monty Python‘s the Galaxy Song; it tends to happen whenever I see a photo that really makes our relative size in the universe undeniable. I’ve included it here, have a listen and a laugh, and remember that your standing on a planet that’s revolving…

Out of the many presents that I got for my daughter this year, the one I think we’re both most excited about is a telescope. She’s been asking for one for months now, and “Santa” finally decided to get her (and her mom) a pretty nice reflector telescope for Christmas. In anticipation of this gift we’ve been looking at astronomy pictures almost daily, and today we came across this one, again courtesy of Phil Plait (click the link as he offers, as usual, a great explanation of what it is we’re seeing here). As soon as she saw it she yelled out “It’s Rudolph the red-nosed reindeer!” And indeed, it really does look like him!

Hope everyone has a wonderful Christmas Eve.

I’ve been avidly following Sky-Watching this holiday season as they count down to Christmas with some of the most beautiful astronomy photos I’ve seen. I came across this picture a few days back on Phil Plait’s Bad Astronomy blog, as well, and looking at it for the second time I realized that it’s just too beautiful (and seasonal) not to share.

You should definitely click to enlarge this image to see it in its full beauty.

This devastatingly beautiful image shows the birth pangs of a massive star. Called IRS 4 (for Infrared Source 4; it was first seen in IR images), it’s the really bright star just below center where the two blue lobes come together. It’s a bruiser, an O-type star with at least 15 times the Sun’s mass — 30 octillion tons! — and is a staggering 10,000 times as bright. It’s still in the process of forming, but it’s nearly there.

He has much more detailed information on his site, and I highly recommend giving it a read.
Happy Holidays!

I think it was Woody Allen that said “If you want to make God laugh, tell him your plans.” I will second that. On Wednesday I was confidently writing that I was back to blogging , my mind filled with nothing but great ideas, when both my daughter and I got quite sick; sick enough to land me in the hospital. Thankfully, we’re both on the mend, and although I’m too tired to write much today, I did want to share this series of images that I came across earlier this afternoon (on Bad Astronomy – thanks Phil!) as soon as I returned to the land of wi-fi.

By now you all know of my love of all things lunar, and these images immediately tapped into that. They’re playful, whimsical, and simply beautiful. They were taken by award-winning french photographer Laurent Laveder. The rest of this series titled “Moon Games” can be found here, and many other equally stunning images can be found here, on his website.

May they make you smile, as they did me. 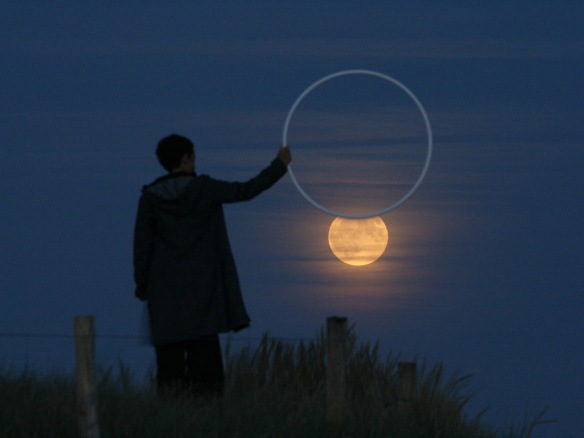 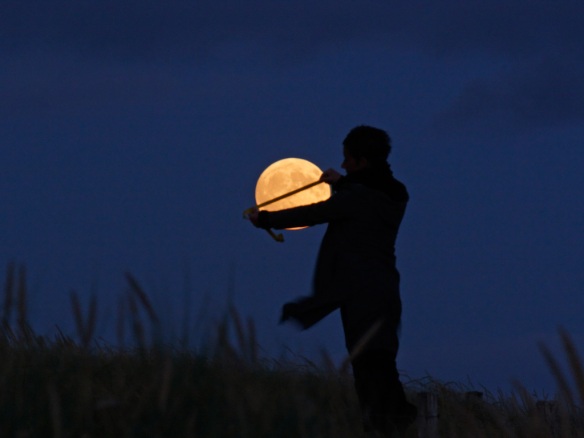 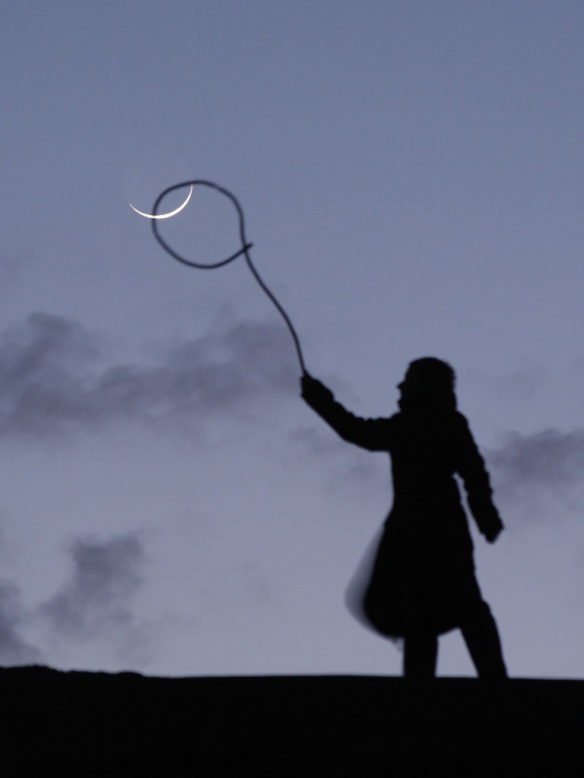 Moon and Venus Nov 26 2011, a set by thebadastronomer on Flickr.

A beautiful series of images of an impossibly thin crescent moon accompanied by Venus. Thank you Phil Plait for taking and sharing these photographs.

Last week I posted a video of the earth as seen from the International Space Station. Yesterday, I came across a similar video, but with an important difference, this video is attached to a greater movement. Astronaut Ron Garan, who took the photos to create this time-lapse video, along with other stunning photos such as the one above, was so impacted by this view, that he set out to effect some change with it. On his site he writes,

Seeing humanity’s magnificent accomplishment against the backdrop of our indescribably beautiful Earth 250 miles below took my breath away. I wasn’t just looking down at the Earth.  I was looking at a planet hanging in the blackness of space.

It was very moving to see the beauty of the planet we’ve been given. But as I looked down at this indescribably beautiful fragile oasis, this island that has been given to us and has protected all life from the harshness of space, I couldn’t help thinking of the inequity that exists.

I couldn’t help but think of the people who don’t have clean water to drink, enough food to eat, of the social injustice, conflict, and poverty that exist.

The stark contrast between the beauty of our planet and the unfortunate realities of life for many of its inhabitants reaffirmed the belief I share with so many. Each and every one of us on this planet has the responsibility to leave it a little better than we found it.

What a beautiful and apt sentiment. Reminded me of Sagan’s “Reflections on a Mote of Dust.” Garan took this inspiration and created Fragile Oasis, a way to create a community with the “common goal of sharing our humanity and improving our world.” As a lover of science, a history teacher, and an inhabitant of this “pale blue dot,” its difficult for me not to want to get involved in some way. Moreover, watching the news lately and seeing how painfully divided we are, how quickly we resort to violence in the face of disagreement, and how little we are willing to work together to secure a better future for ourselves and our children, amplifies that desire to want to do something, anything to change our course. Check the link, look at the video, and become inspired to do whatever little we can each do to create a better place to live. It doesn’t take much.

I came across this fascinating and funny excerpt from the British television quiz show named QI, for “Quite Interesting” (thanks Bad Astronomy.) The contestants were shown a video of a sunset and given a seemingly simple task, to press the buzzer as soon as the sun dropped below the horizon.

So there you go… a little laugh, a little science, and a big check on our reliance on our perceptions.  Happy Monday and enjoy!